Do you ever find yourself trying to add more low end to your guitars, or your vocals, hell - even your bass guitar recordings? Or finding, maybe, that there's far too much low end, and that you’re lacking (somewhat, or a lot!) in detail, definition, or clarity?

There’s a simple solution, and it's been staring you in the face all this time!

Now, there’s some simple physics behind this, but understanding it may help this make more sense. Different frequencies have different lengths of waves (this makes their frequency higher you see?) but the same amount of energy as each other.

This doesn't mean they all travel the same distance, however - if a shorter wave makes 4 peaks of its wave out of the energy given, then a lower frequency wave may make the same over a much longer distance due to the length of the wave.

This is how Proximity Effect basically works; the closer the microphone to the source, the more energy you’re allowing for the lower frequencies to build to reach the full potential of the wave, as catching it early with the microphone closer will accentuate the amount you hear, and the higher frequencies need much less time to reach the potential of their wave due to the length of it, and therefore dissipate much more easily!

Using this information can greatly help you when finding yourself in the situations detailed above.

This can even be brought into the world of drums, and especially bass guitar.

Next time you’re re-amping or tracking your bass guitar through a Bass Amp and Cabinet, use a condenser microphone, around 1 ½ ft, to 2ft away from the cone, dead center of the speaker. Even one microphone will be able to bring out the warm, chunky low end of your bass without being overpowered by being too close and getting too much bass.

This same technique can be applied to your Kick Drum as well!

Along with the inner microphone you may have placed aiming towards the beater for the ‘click’ and presence of the Kick Drum, try placing a condenser microphone on the outside of the Kick, around the same distance as above adjusting to what sounds right to you.

This has typically been a technique used for around the last century on countless Jazz, Blues, and Rock acts to bring out the ‘boominess’ and body of the Kick drum without losing too much depth and upper mid range to work with as well. 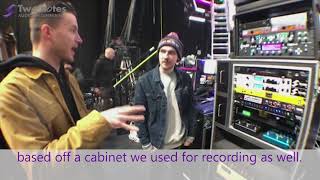